Except where otherwise noted, content on this site is licensed under a Creative Commons Attribution-NonCommercial-ShareAlike 4.0 International license.

By Youseph Elmasry in Annotated Images on November 22, 2020.

What better to represent a wishful impulse than the forbidden fruit itself? 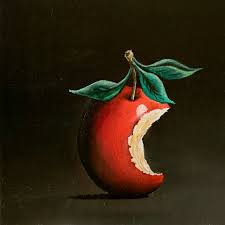 The story of Adam of Eve is essential to each of the Abrahamic beliefs, which include Islam, Christianity, and Judaism. Though the image of the bitten apple appeals to the Christian narrative, this annotation will consider the nuances of the Islamic discourse. Adam and Eve were created in heaven– everything was available to them, however, they were not to approach Shajarat Ul-Khold, the tree of immortality. Some curiosity and desire later, they transgress by eating from the tree, which was their own wishful impulse, and as a result, they are brought down to Earth.

If this degradation of character, which begins from a now seemingly meaningless annoyance to a cat, can be considered a punishment of its own sort, that acts out by destroying the protagonist and leaves him to incriminate himself, is this not a punishment that would have been the result of acting on a wishful impulse? If so, then there are parallels that can be drawn between the overarching theme of acting on your wishful impulses and the consequences it can have on your person, which is the case of the protagonist, or on your status, which is the case of Adam and Eve.

← Arthur Fleck’s Acting on Wishful Impulse Creates the Joker The Black Cat: A Psychoanalysis of the Narrator’s Losing Touch with Reality →

Need help with the Commons? Visit our
help page Send us a message
Skip to toolbar

Built with WordPress | Protected by Akismet | Powered by CUNY